Associate Professor of Aerospace Engineering, Dr. James Cutler discusses CubeSats and how spacecraft the size of a loaf of bread are revolutionizing space technology and exploration

by | November 11, 2020
Dr. James Cutler discusses CubeSats and the role of U-M in their development. | Medium Read

One of the most exciting recent trends in aerospace engineering is the development of very small satellites called CubeSats, which are often comparatively inexpensive to build and launch. Today, over 1,100 CubeSats have been launched  in orbit and two have even flown past the planet Mars. We recently sat down via Zoom with Dr. James Cutler, Associate Professor of Aerospace Engineering, College of Engineering at U-M, and one of the leading experts on CubeSats, about this bleeding-edge technology and the part that Michigan is playing in moving it forward.

What is a CubeSat?
A CubeSat is a small spacecraft that we invented back in roughly 2000, and because of its small, defined shape, it allows us to get access to space a lot easier by launching a lot more along with larger rocket payloads or from the International Space Station. 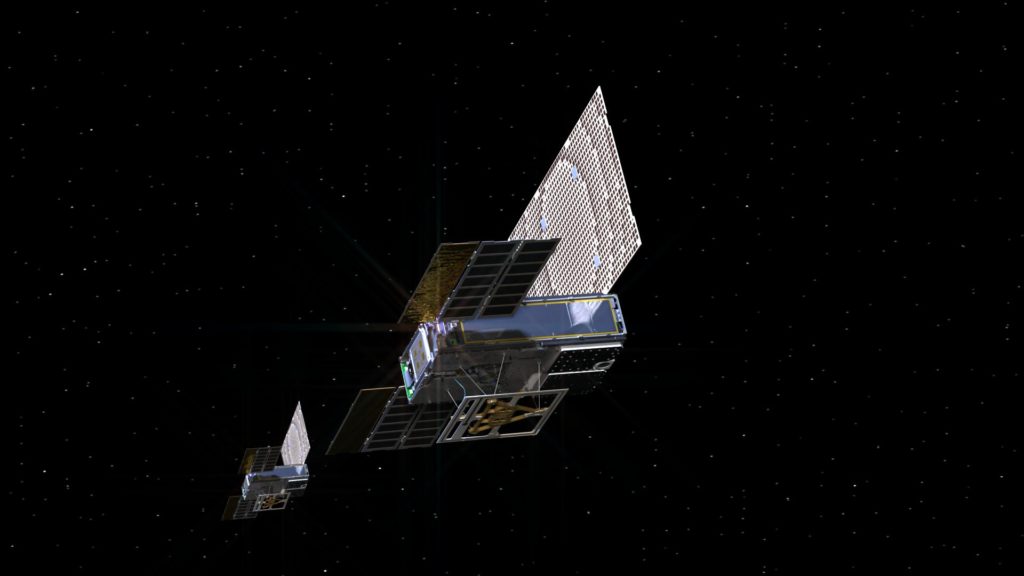 How is a CubeSat different from the very small satellites that were launched in the 1950s and ’60s?
That’s something that we talk about all the time. What’s new is rather a simple idea of a standard shape, weight, and dimensions. The document that describes it is really short – just a few pages long. It’s basically a small spacecraft made of standard blocks 10 cm on a side and weighing under 1.33 kg, so, for example, a satellite could be a small cube or a rectangle about as big as a loaf of bread.

We can integrate this standard shape and size to almost every rocket in service. If you look at many other spacecraft, they’re all custom-built. They have antennas, solar panels, and a few widgets sticking out everywhere. A CubeSat is standardized in an easy way, like building blocks. It’s also constrained, so you can only put so much in the box, which helps us stay under budget and get things done more quickly. 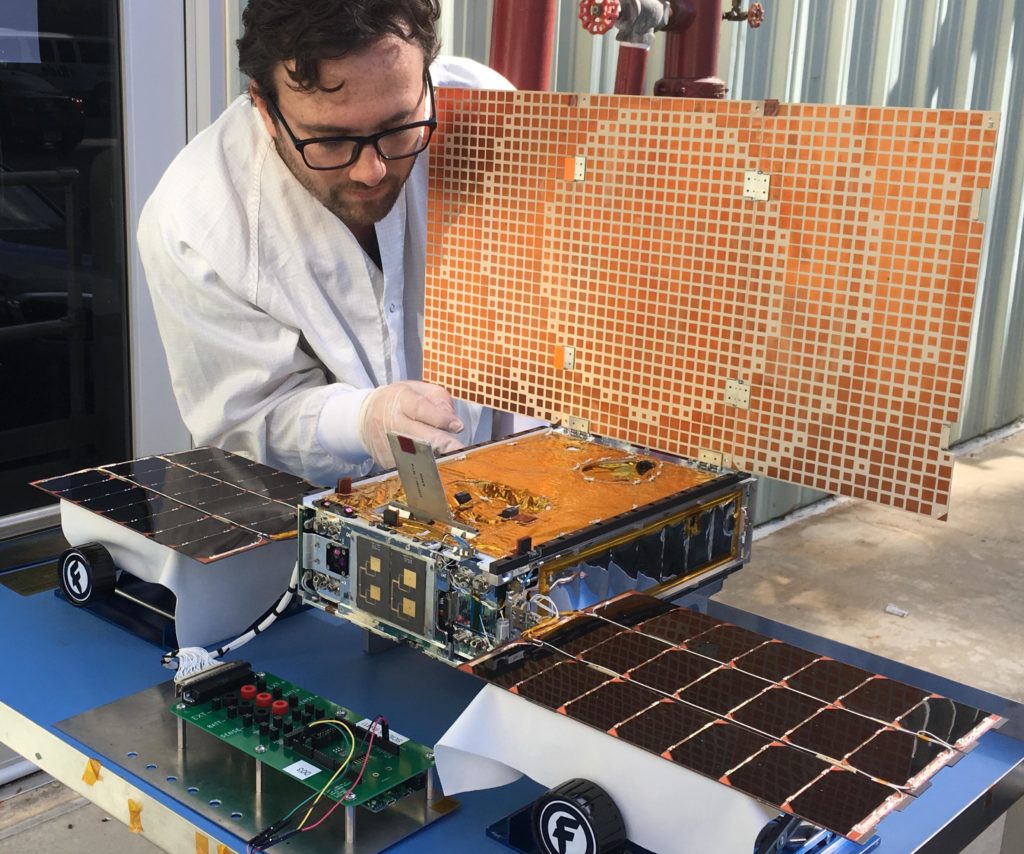 IMAGE:  Engineer Joel Steinkraus uses sunlight to test the solar arrays on one of the Mars Cube One (MarCO) spacecraft. Credit: NASA/JPL/Caltech

You have a small standardized shape that might be helpful for launching it, but it’s very small. What advantage do you have if it’s so small that it doesn’t do anything?
Sometimes you want something small. Sometimes you want something large. It really kind of depends on what you’re trying to do. There is a challenge in what usefulness you can put in something like this, but sometimes you trade the size of the spacecraft for a number of the spacecraft. As an example, we can create a very large spacecraft that has a very large telescope, or a very large number of small spacecraft that can cover the entire world. That’s what people are working on now – lower resolution, lower individual spacecraft capability, but larger network capability.

So, you can cover the whole world if you have enough of these?
That’s right. Because they’re so small, they’re going up on almost every rocket. That makes access to space extremely easy. What used to take five, 10 years now takes six months and that time is going to decrease as we get better at it. Rather than designing a large, monolithic spacecraft where you have all these sensors that all have to play well together, you can now split it up into small spacecraft that have to coordinate, but they don’t have to coordinate tightly. They spread out to provide the interface that lets you do more creative things.

But is it just all the hardware advantage? These things have to play with each other and play nice.
Yeah, but we’re good at that. Our phones play with each other, our computers play with each other. So we just put that into the spacecraft. It really does allow anybody to start thinking about what they can do in space. Can you solve people’s communication problems? Can you do remote sensing data for somebody? Can you create businesses and services on orbit that allows anybody to do this?

We’ve already helped students in countries around the world create their own space programs. We’ve done global hurricane monitoring and deep space communication exploration with CubeSats. We flew two on a mission called Mars Cube One (MarCO) to Mars. It was led by Michigan grads and U-M built some of the hardware that went into it. 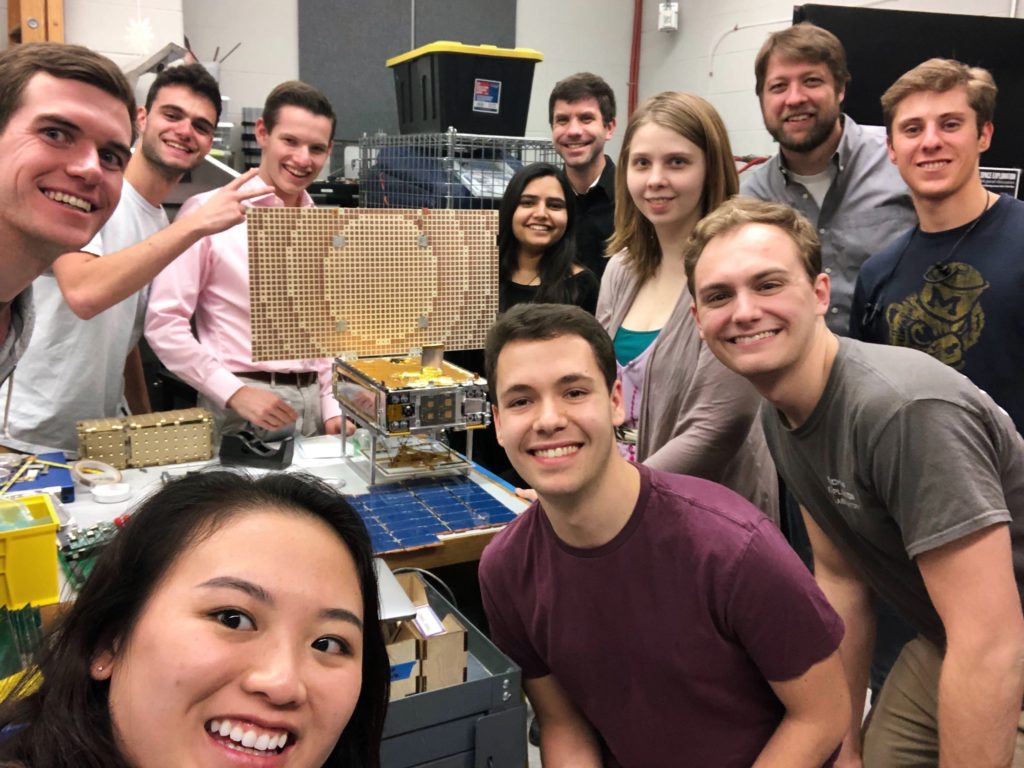 What’s your opinion about the success or failure of the Mars mission CubeSats?
In many ways it was a spectacular success. It provided an almost mission-critical capability during the descent and touchdown of NASA’s InSight Mars lander. It was not pre-planned as part of the mission, but there was an opportunity and MarCO slipped in. It’s a fantastic example of how we can do something innovative, creative, and useful. It proved to NASA that we could do useful work with these small missions. We were a real-time communication relay between the InSight lander and Earth. Every piece of data, every image that we saw from that landing initially came through to the MarCO spacecraft.

I’ve always been involved in space. My grandfather worked for Thiokol. He built rocket engines. My father was a pilot, so I’ve always loved stuff that flies.

How did you get involved in working on these things? What made you say “I want to work with little space-faring tissue boxes?”
I’ve always been involved in space. My grandfather worked for Thiokol. He built rocket engines. My father was a pilot, so I’ve always loved stuff that flies. When I was a grad student at Stanford, I helped build a spacecraft called OPAL, which was the Orbiting Picosatellite Automated Launcher. Our goal was to build these little tiny spacecraft that had magnetometers onboard and rather than flying one spacecraft with a single magnetometer, fly a bunch of magnetometers to get a better view.

Where do you see this technology in 10 years?
I’m hoping that it’ll connect people. Our department is collaborating with global ground station networks to talk and move data around. It’s very international. I’ve even been at the UN chatting with diplomats about potentially using these spacecraft to connect people around the world to promote peace. I think we’re moving into a time when we can actually start building economies with humans either near Earth, on the Moon, or Mars, and I think these small spacecraft are going to play a huge role in that.

What are some recent developments regarding U-M and CubeSats?
We have been working with a company called Spacebit. They’re based out of London, and they want to put a rover on the Moon, so we’ve been talking about taking some of our CubeSat technology, adding some legs, and working with the company to produce mini walking rovers. 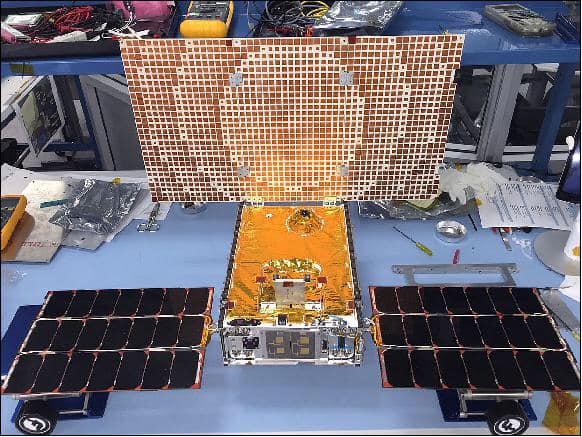 How far along are the talks?
We have a little bit of funding from them. It took all summer of 2020 to get but it’s finally in-house, and Spacebit actually wants us to integrate our technology, and they’re trying to get on a flight for the next year. I always get nervous because I don’t know if we’re actually going to get that rover done. But it’s a fantastic story – small robots that explore the Moon. It’s pretty neat.

Are you talking about just sending one spacecraft or a cluster of them, or do you have any idea what it would look like?
There are several in a sequence that would involve various robots for small exploration. These would be the secondary robots that are attached to a primary lander, and then they deploy and move around for exploring the lava tubes and general geology, as well as inspection of various other vehicles that have landed previously.

Would they use the lander as a sort of like a communications link or would they communicate directly?
They would relay through the lander to communicate back to Earth. If we have enough mass, we will put in a low-data-rate, direct-link to the rover itself from the ground, but that won’t be very high speed. It’s like deploying little UAVs that don’t fly, but it’s also like you have UAV support systems around these various rovers. It’s pretty simple.

How do your students respond to having real work like this? It’s remarkable that you’re able to have students producing something that is practical.
There are countless stories. One student came to me as an undergrad, saying his team wanted to build CubeSats, and we had to figure out how we could fit everything in. He ended up designing a battery system for our spacecraft. He then went to SpaceX, designed better systems for the Dragon spacecraft. Now, he’s one of the main leads on Crew Dragon, so just to see that evolution of the students looking up at the sky to actually building the spacecraft is exciting.

Frankly, these students don’t know what’s impossible and they have a vision. They have creativity. I guess that allows them to try impossible things. Because of that, it’s a fantastic environment to take these younger generations, combine that with age-old problems, and see where they go.