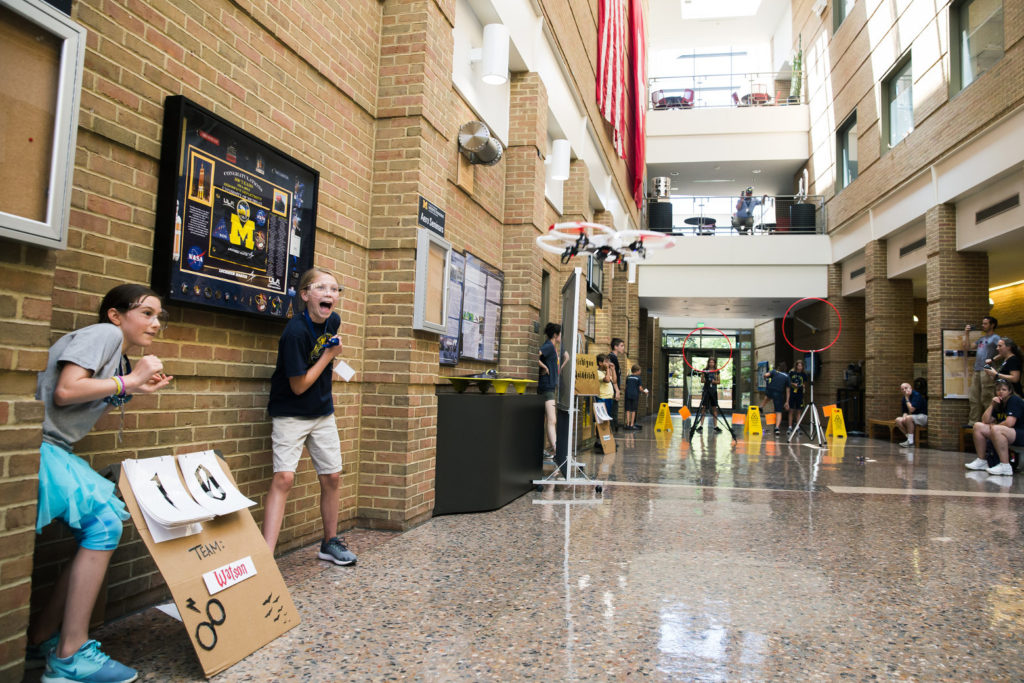 IMAGE:  A student cheers on her House's quadcopter during the Quidditch tournament. Photo Credit: Chris Chartier.

Passerby in the Francois-Xavier Bagnoud building this summer may have come across a peculiar sight: a Quidditch pitch set up in the atrium. Those familiar with the fictional game created by JK Rowling, author of the Harry Potter series, would have been surprised to see quadcopters flying through the Keeper’s hoops – not Quaffles.

Ever since Harry Potter and the Sorcerer’s Stone was released in the United States in 1998, Aerospace Engineering Associate Professor Anouck Girard wanted to incorporate her work with robotics into the game. However, as a Master’s student in Ocean Engineering, she saw that the intersection of robots and sports was limited to clunky robo-dogs and bipedal robots footing soccer balls around. The field of autonomous vehicles was not yet ready for Quidditch.

Twenty years later, as Harry Potter celebrated its 20-year anniversary in the US, Professor Girard knew it was time to revisit her dream. A fitting platform was Xplore Engineering and Discover Engineering, two annual engineering engagement programs for 4th-7th graders and 8th-10th graders, respectively. Every year, students are invited to participate in the two-day programs with an adult alum in their life, usually their parent, guardian, or grandparent. The goal of each program is outreach: giving students the chance to explore engineering disciplines before they’d have the chance to learn about them in school. Even twenty years after its publication, a common experience for kids in America is reading Harry Potter. At the same time, recreational and commercial drone usage in the US is increasing annually. According to Professor Girard, 2018 was clearly the time to “give [autonomous Quidditch] another go.”

The Quidditch game that Professor Girard has recreated with undergraduate lab assistants Sabrina Olson and Ana Timoficiuc, Aerospace Engineering Professor Ilya Kolmanovsky, graduate students, and the FXB technical staff is close to the sport described in the Harry Potter novels. On each side of the pitch, there are three hoops. The operator of the drone acts as the Keeper, maneuvering their drone like it’s a Quaffle; if the drone flies through a hoop, ten points go to that player’s team. In the high school version of the event, contact with the “flying snitch” quadcopter results in an automatic win. The players are even sorted into Hogwarts Houses, receiving red, yellow, green, purple or blue laser-cut tokens that denote the house and a historical anecdote about the University of Michigan. One difference, Professor Girard admits wryly, is that there are no Beaters in the game. Flying shards of plastic showering down from a high-impact quadcopter collision pose a safety hazard to students. 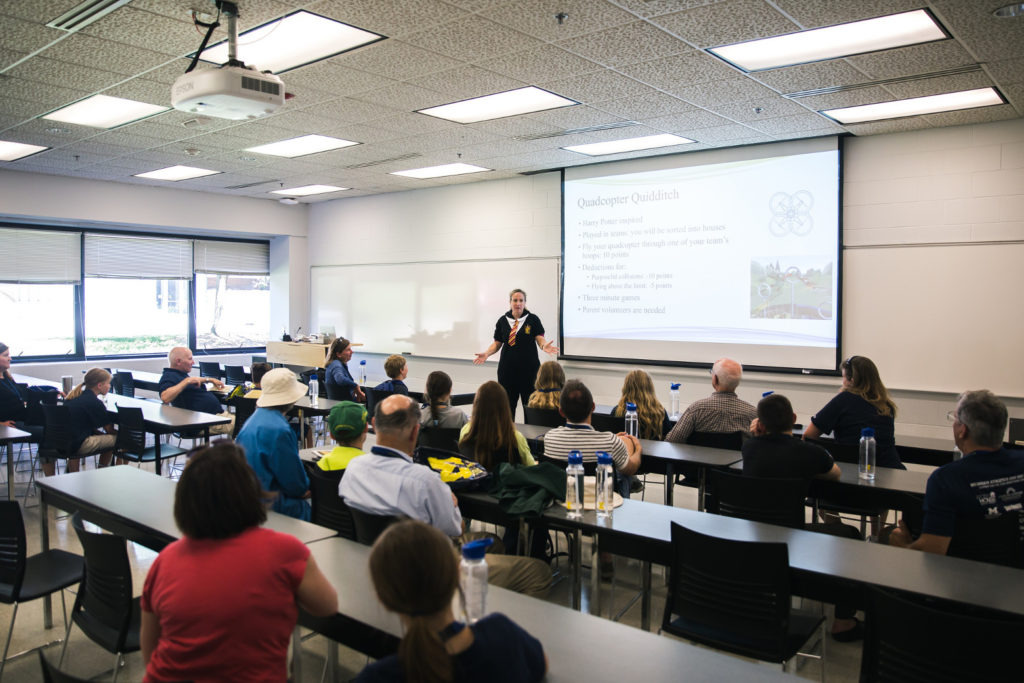 Through the magical game of Quidditch, Professor Girard hopes to teach the next generation of engineers (and their parents) about the very real science that goes into ensuring that unmanned vehicles are flown safely and efficiently. As Co-Director of UM’s Vehicle Optimization, Dynamics, Control and Autonomy Laboratory, she hopes to “research and develop enabling technologies for controlling advanced and increasingly autonomous vehicles operating in the space, air, ground and marine domains” using control theory. The goal of the tournament is to provide an observable example of the problem we face as air traffic congestion increases: it is difficult to maneuver eight drones in a small Quidditch pitch safely and without collision.

Once she had decided to undertake the project, Professor Girard quickly realized that she needed help to make Quidditch come to life. “One thing is for sure,” says Girard, “Madam Hooch couldn’t have taught Quidditch all by herself.” She credits the outreach effort’s success to her undergraduate lab assistants, Sabrina Olson and Ana Timoficiuc, a junior and a sophomore in Aerospace Engineering, as well as her graduate students and the technical staff. Olson and Timoficiuc worked all summer to set up the game, create the pitch and scoreboards, and to design a safety system for the competition. On her outreach work this summer, Olson remarks, “It was valuable to give back to the community. I got to help students fly drones for the first time and it was a wonderful experience being able to help them gain hands-on aerospace experience at a young age.” Timoficiuc expresses that her passion for outreach is homegrown; she received her high school education from an under-staffed, under-funded school system in which a few teachers encouraged her to attend college. 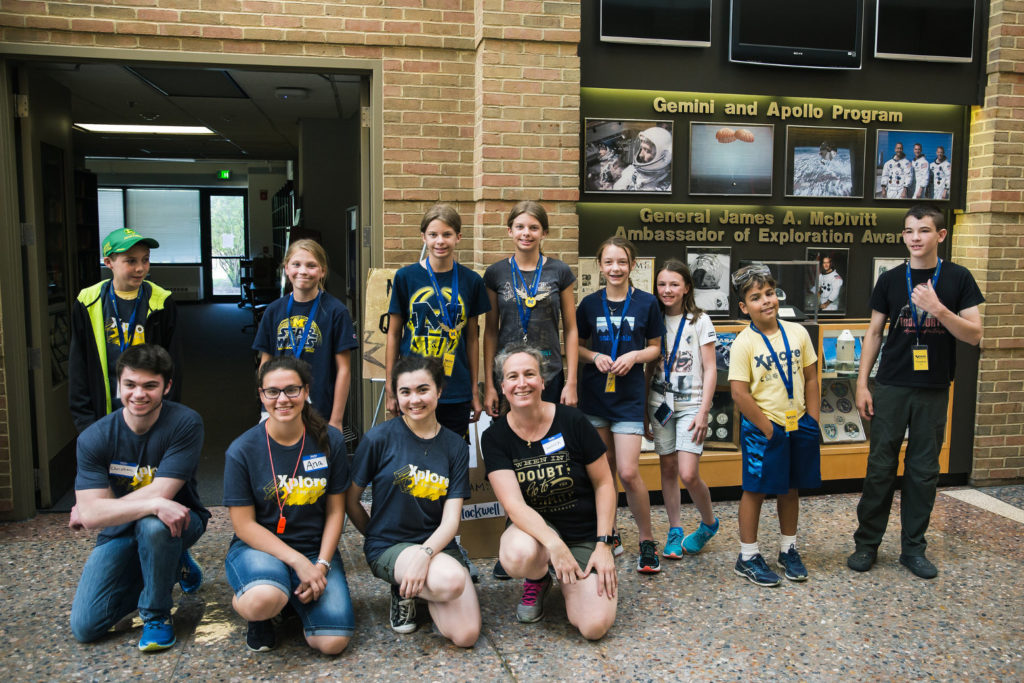 Timoficiuc reflects: “Outreach is something I am very much passionate about due to the cultural influence I had growing up as well as the schools I attended prior to Michigan. In some sects of Romanian culture, women are not encouraged to go to college. It was because of a handful of teachers and mentors who continually encouraged me and introduced me to STEM – through activities, events, and working opportunities –  that I was fully supported in my want to be an aerospace engineer. Then, there is my high school “education”. I went to an extremely underfunded high school. I really want to give back to my community because they are largely neglected, even though they are only a short half hour drive away.”

The future of Quidditch at the University of Michigan is bright. Professor Girard, Olson, and Timoficiuc will reprise their roles as the collective Madam Hooch during Fall Study Break from October 15-16, during which local high schoolers will participate in the tournament and subsequent lab tours. The goal is to reach high schoolers who would not normally be contacted by undergraduate students engaging in outreach efforts. UM Robotics will be hosting a Tech Takeover in North Ingalls Mall on September 21st in which the Quidditch tournament will be demonstrated to the public. Professor Girard also envisions an event designed for elementary schoolers; the youngest students in Xplore Engineering are already 4th graders. To Girard, the earlier the students are introduced to the world of science, engineering, and aerospace, the more likely they will be to pursue engineering when they are college-aged. “A stitch in time saves nine,” she quips.

All those interested in volunteering to run a game of Quidditch may send their information to Professor Anouck Girard at anouck@umich.edu. Volunteers will be setting up, charging batteries, and otherwise conducting the tournament.